A Day in the Life of a Forester, Spotlight: Wes Yeomans (Georgia, USA) | Rayonier Stories Skip to content

Stories Meet Rayonier A Day in the Life of a Forester,…

What do foresters do on a daily basis? Spend a day with Rayonier Resource Land Manager Wes Yeomans!

Forestry is often compared to farming, just on a longer rotation. And for Forester and Resource Land Manager Wes Yeomans, working as a “tree farmer” is the ultimate dream job.

“I started with Rayonier in March of 2016 when a former employee called me up. He said that the company was bringing back their technical forester program, and asked if I would be interested. The job consisted of timber sale line painting, as well as harvest and inventory cruising. He said I’d meet all of the local loggers, learn site prep and get a well-rounded experience.”

Wes took the job and was later promoted within Rayonier, ultimately landing him in the role he is in today.

“At the beginning of 2022, I took a new role as Resource Land Manager. I moved from the timber marketing side into the silviculture land management side. I now oversee everything that is not timber harvesting: road work, chemical applications, planting, site prep, and fertilization applications. If it’s not actual harvesting, it’s on my to-do list.”

A natural outdoorsman made forester

Having grown up in the outdoors, Wes found forestry to be the obvious career choice. And in fact, he chose it based on his personal experience with Rayonier.

“As a kid, I spent a lot of time hunting and fishing with my dad. I always knew I wanted to go into a profession that allowed me to be outdoors. While in high school, I took several agricultural classes and one focused on timber management. I learned a lot about the industry and even visited a Rayonier Demo Forest.”

It was Wes’s senior year of high school. Rayonier hosted his class at a demonstration forest in Wayne County, Georgia. By the end of the field trip, Wes knew he wanted to learn more about becoming a forester.

“Rayonier employees shared about different planting density studies. I remember one of them asking the class a question about tree density and why they would plant in such a way. I raised my hand—a 17-year-old kid that didn’t know anything—but I spoke up anyway. I answered, ‘The same volume but different size trees gives you different types of end products.’ At that time, I didn’t know much about forestry, but getting a first-hand look at what they do, how they do it, and why they make the decisions they make really piqued my interest.”

While in high school, Wes was tasked with completing a dendrology notebook focusing on the scientific study of trees.

“With everything we were learning, my friends and I would quiz each other on the different types of trees. I was always wanting to know what was around me.”

Wes graduated from high school in 2008 and was accepted into the Abraham Baldwin Agricultural College, known as ABAC, in Tifton, Georgia. In 2013, he graduated with a Bachelor of Science with a focus in Forestry Management and Natural Resource Conservation.

“ABAC gave me a solid foundation for my forestry career. We did a lot of hands-on learning. I really believe that helped set me up for success for the job I’m in today.”

A day in the life of Rayonier forester, Wes Yeomans

In this series of photos, we followed Wes for a day to learn more about the work he and his team do while prepping a site for future forests. Each morning he begins his day in the office.

“I start my day at the office checking my calendar and email. I’m looking to see if I have any active site prep contractors out in the field. If I do, I make a plan for what they can be working on. From there, I set out to go check on them.”

Although he starts his day with a plan, Wes must always prepare for the unexpected.

“It’s tough to share a typical day on the job because my day-to-day can be so unpredictable. I’ll start my day with a list of to-dos, but things almost always change.

“For example, I have plans to go check on my site prep contractors. I get a phone call from a logger harvesting out in the forest. He says, ‘Hey, I’m harvesting timber at so-and-so road, and the log truck driver just called me. The culvert has given way in the middle of the road and my guys can’t get in and out safely. We need this fixed!’ And so, my plans will change. I can’t go check on my site prep contractor anymore because we are faced with safety and production issues. My job now is to get down there, check on the culvert, stop the loggers from coming in and out, and call a contractor to come to dig and fix the culvert. It’s my job to make sure we can get back on schedule.

“But that’s what I like the most about my job: you don’t know what the day is going to hold. It makes it exciting.”

Next, Wes heads out to check on active site prep contractors

When he heads out to the field, Wes is monitoring all aspects of the forest. The job is all-encompassing and requires him to multitask.

“If I have active contractors, I’ll head out to a working site to check on them and to see how things are going. I also make sure they have and are using all of their safety equipment.

“From there, I always have in my head what’s coming next. In my area, if they are working on a [tree farm site], conditions have to be just right. Soil moisture can’t be too wet or too dry. I check on those blocks and report back to the contractor’s manager on how things are going.

“After I check on them, I might head out to look at any road work going on. Do they need to be graded? Are we moving wood out of here? Do we have future plans to move wood? How are the roads holding up? If there’s a big hole, do we need to fill it with some rock and dirt? I’m continuously checking on multiple things while I’m out.

“And, if I’m lucky, I might get to eat lunch during the day,” he jokes.

While out in the field, Wes watches over his contractors as they shear the ground, preparing it for a future planting season. They use a big ‘V’ blade, also known as a shear, on the front of the bulldozer to clear the land of debris and stumps.

“One of my responsibilities is determining which blocks require shearing. Some blocks of land need it, while others do not. If an area needs clearing, I’ll map it out and hand it off to my contractors. That’s the art and science of my job.”

The shear is placed flush with the ground and moves downward. It has teeth to cut straight through large stumps, just like a knife cutting through butter. After a shear pass, a bedding plow is pulled directly behind the bulldozer to create lanes of dirt for the future planting of Rayonier forests.

“We have specified guidelines for how wide each shear lane needs to be. These guidelines need to be followed because the width of the shear lanes will directly affect our planting densities when we plant seedlings in the winter. I ensure the contractor is establishing rows with widths that are within those guidelines.”

With shearing complete, Wes measures and reviews the plantable ground

Using a yellow diameter tape, Wes works through each shear lane to measure for width accuracy.

“That’s how we calculate trees per acre. Knowing the width of the beds helps us know how to space the trees. It’s all about spacing.”

Planting season spans from November to February each year. Seedlings are planted based on a set number of trees per acre, also known as “tree density”.

“Rayonier conducts density studies over time. Through this research, they have determined what percentage of tree coverage is best. We plant based on those set standardized tree per acre numbers, and manage them off of our growth and yield models. From there, we decide when to thin stands, which allows the trees more room to grow if needed.

“I love how what I do now ties back to the field trip at the Rayonier Demo Forest all those years ago. My work revolves around density, the very thing the Rayonier employee was asking our high school class about. It’s all come full-circle for me.”

Before heading back to the office, Wes flies a drone to check site prep completion

Accurate acreage calculation is important because most site prep contractors are paid on a per-acre rate. It is Wes’ responsibility to ensure acreage is accounted for after an area is prepped.

“If we send a contractor a 100-acre site prep area, and they only prep 95 of those acres, we need that information so we pay them correctly. We also need to know an accurate acreage estimation of that particular stand moving forward.”

That is one way foresters use drones.

Wes received his drone pilot’s license about 4 years ago. Drones are handy, especially when areas are swampy or inaccessible.

“As soon as a contractor has completed mechanical site prep, I need to ensure that all of the acreages were treated correctly and that no spots were missed.

“The drone software that we use automatically flies the area based on the parameters we set. During the flight, the drone takes pictures in a grid-like pattern of the entire area. When I get back to the office, the imagery is uploaded and processed. The software company then stitches the images together to give us a real-time aerial view of the land. I load them into our internal network where I can view the images in closer detail.”

The imagery from the drone gives Wes a clear picture of the contractor’s work on the assigned land.

“Sometimes the contractors aren’t able to work in every area because of wet ground conditions. They miss areas or sometimes work more acreage than predicted. While examining, I can overlay the imagery within our internal software system to reshape the area based on what was actually treated. This is how I get an accurate acreage estimation. 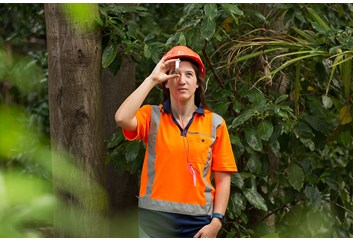 One Forestry Class Changed Everything for this NZ Forester 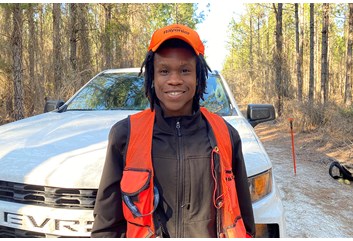 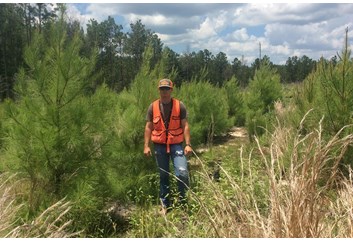 How a Forestry Grad Found His Calling