Stories In the Community DIY Stories Returning To Woodworking’s Roo…

Hand tool woodworking leader Tom Fidgen shares how he became an internationally-renowned woodworking teacher—and why he gave up power tools.

Human beings have used hand tools to transform wood into homes, furniture and survival tools for centuries. However, the invention of electricity in the 1800s quickly propelled powertools to the frontlines of the industrial, professional and hobbyist trades of woodworking. Yes, most builders and artisans still use some hand tools, but few would be willing to give up the convenience and thrill associated with modern power tools.

Yet, as society has sped forward—adopting anything and everything to make life more convenient, efficient and streamlined—there have remained a minority dedicated to the “old school” way of hand-crafting wood. Today, in the fast-paced culture of 21st century North America, unplugged woodworking is experiencing a serious comeback.

One of the leaders in this movement is a former musician-turned-woodworking mentor and best-selling author: Tom Fidgen. He runs “The Unplugged Woodshop,” a 100% handtools-based woodworking school in the heart of downtown Toronto

Tom has written two books and teaches classes online and abroad (and has some big fans here at Rayonier!). We caught up with Tom to learn more about his journey to going unplugged and the growing trend of hand tool-based woodworking.

How Tom Went From Record Deals To Woodworking Unplugged

Most modern woodworkers use a combination of power and hand tools, with more emphasis on the power tools. This once was the case for Tom, who originally learned how to build from his father.

“I started woodworking with my dad at a very young age. He was a firefighter and did carpentry jobs in his spare time. After high school I became a professional musician, signed a record deal and did a lot of touring. Whenever I wasn’t playing music or on the road, I was always building or making something.”

As a guitarist and singer, he was always hyper-aware of the risks of using power tools for the sake of his hands and hearing. But it wasn’t until he moved from the Canadian East Coast to Toronto that he gave up power tools for good.

“Not knowing what kind of shop space I’d be able to afford in the city, I decided to leave all of my power tools behind and see if I could make a go at making furniture with only hand tools. That was around 2007 and I haven’t looked back since. Hand tools made sense and have been my norm for the past 14 years.”

Blogging Opened The Floodgates For The Unplugged Woodshop

Like many artists, Tom started a blog to document his process and display his hand-crafted furniture. Little did he know his blog would launch a new career path.

“Soon after I started the blog I was approached by Popular Woodworking to write a book on the subject, Made by Hand: Furniture Projects from the Unplugged Woodshop. Two years later, I signed another publishing deal with the Taunton Press. With the release of my second book, The Unplugged Woodshop: Handcrafted Projects for the Home and Workshop, I started to get invited to teach in woodworking schools all over the world.”

Tom soon opened his own school, The Unplugged Woodshop in Toronto. There, he welcomes students from all over the world, in-person and online, to learn how to hand craft furniture and other works of art using hand tools exclusively.

The Unexpected Benefits of Going Unplugged

When asked what types of people his classes attract, Tom replied: “I get a lot of engineering students, architects and artists in my classes. But that said, I get men and women, young and old, amateur and professionals. I think we as humans enjoy the creative process and making things with our hands is critical in our behaviour.”

Students sign up for Tom’s classes to gain experience practicing his unique form of hands-on instruction. But for many, the classes and the process become about much more than just the woodworking:

“I think so many people sit in front of a screen day-in and day-out with nothing to physically show at the end of their days. Woodworking, especially using only hand tools, fills the gap.”

Slowing down and working with hand tools also gives students the added benefits of stress relief, increased focus, and a feeling of accomplishment.

“Learning how to slow down and make things by hand is extremely important and healthy in our fast-paced society.”

For Tom, what he loves most is the process and the people: “I love the challenge. Both in teaching as well as in my own making. I also love meeting people and watching them grow and get excited about learning a new skill. It never gets old.”

When asked about his favorite wood to work with, he said, “Hmmmm…that’s a tough one….probably maple if I had to pick just one.” A fitting tribute to his home country.

“After playing since I was a kid, and being so involved in woodworking, I knew the two mediums would someday meet. Two winters ago I finally decided it was a good time to try building instruments and I absolutely love it. Mixing the two things I like most, music and wood.”

After talking with Tom and spending time on his website and blog, it’s hard to imagine he ever lacks inspiration. However, every artist needs his muse.

“As far as cabinetmaking, I love the work and philosophy of James Krenov,” Tom says. “But as far as inspiration, that oftentimes comes from other non-woodworking places. A painting, a fabric or texture, a photograph or a good design. Inspiration is everywhere, we just have to allow ourselves the time to find it.”

Tom’s Advice For Aspiring Unplugged Woodworkers Is To Literally Unplug

“Just start. Step away from the computer and go and make something. I have a membership site on my website where people can join for $20 a month and see what I do day-in and day-out. I just posted episode 890, so there’s literally years of content with lots and lots of wood working projects. In June I’ll be teaching in Sewanee, Tennessee, at Shakerag Workshops. And of course I’m always at my shop here in Toronto.” To learn more about Tom and the Unplugged Woodshop, including membership and upcoming events, check out The Unplugged Woodshop website and follow him on YouTube and Instagram @theunpluggedwoodshop. 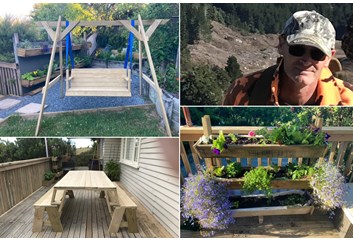 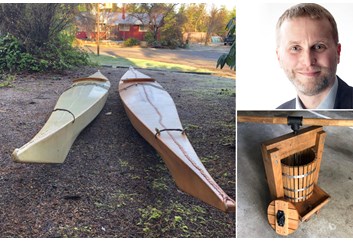 The Woodworkers of Rayonier: Neris Biciunas 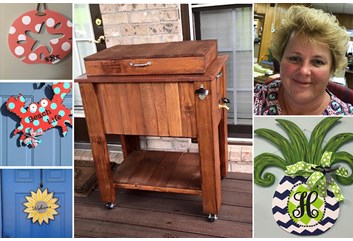 The Woodworkers of Rayonier: Laura Peacock